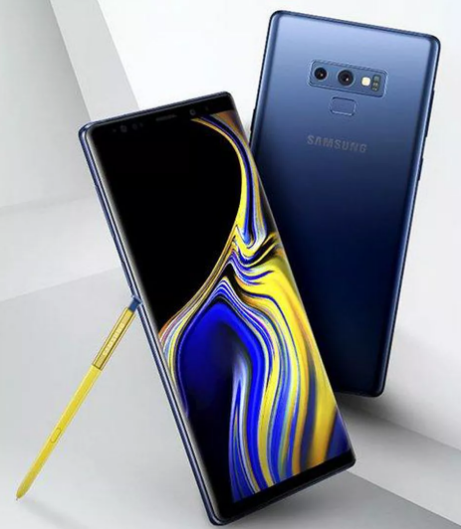 Samsung Galaxy Note 9 is scheduled to release on August 9, however, the first ever legit photo of the device was recently leaked on Twitter. There were many speculations on the design concepts, however, the photo provides an insight on the actual Galaxy Note 9, the successor to Note 8. Well-renowed tipster Evan Blass posted the photo on his Twitter showing off the yellow-colored S Pen with a button which is touted as for Bluetooth operations as it was earlier speculated.

There is no notch support and the rear of the phone looks revamped with the fingerprint reader that has been centrally placed as otherwise placed in Note 8. It was earlier speculated that Note 9 could have a fingerprint-on-display feature, however, the leaks have cleared the air as it has a rear-mounted centrally placed fingerprint reader. Note 9 will have a rear dual-camera setup with one wide-angle camera and another as telephoto camera based on the size of the lens. The first ever photo that was leaked a few days ago shows the first glimpse of Note 9 that looked similar in terms of design as its predecessor.

So far, we know that the upcoming Galaxy Note 9 will take a head-on collision with Google Pixel and Apple iPhone devices in the same segment. The S Pen included with Note 9 is expected to do much more than its predecessor which is beyond navigation, drawing, and writing and since it comes with a Bluetooth button, it will do much more than these tasks for sure. Watch out for this space on August 9 when Samsung unveils the Samsung Galaxy Note 9 officially.

Samsung Galaxy Note 8 was released at a price tag upwards of $950 which could be the same for Note 9, however, the price could vary. The device will sport a 6.38 or 6.4-inch AMOLED display with Qualcomm Snapdragon 845 processor and 8GB RAM. The device boasts a 3,850mAh or 4,000mAh battery with faster wireless charging capability and more. As per the speculations, the handset will come in five colors including lavender, black, grey, brown, and bright blue.

Many speculations have been trashed such as it was earlier reported that Galaxy Note 9 could sport a foldable display which is not true for now. It might come with 3D-sensing facial recognition technology which is one of a sellable feature in a smartphone according to a report, more than 100 million smartphones with 3D sensing technology will be shipped this year. We’ll have to wait until August 9 to get the official specifications.