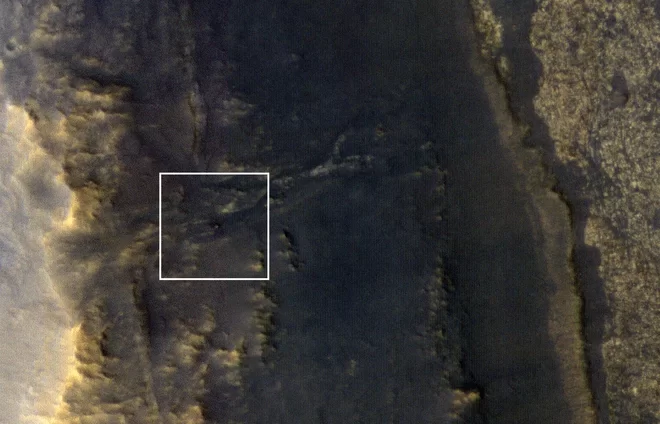 Imagine a multi-million dollar rover sent on the red planet for a 90-days mission and then, have a look at NASA’s Opportunity rover which outlasted its 90-days mission by almost 14 years now. Yes, the Opportunity rover has been operating for 14 years and has undergone several glitches and issues that were fixed by the talented team of engineers and researchers on Earth. However, Opportunity had to undergo the worst dust storm on the red planet which started in June and last till August but now, the storm has abated and researchers are waiting for Opportunity to snap out of its hibernation mode and call back home.

On September 20, Mars Reconnaissance Orbiter (MRO) happened to fly over the famous Perseverance Valley and that is when it captured an iconic image showing the tiny Opportunity Rover chilling on the surface in a pixelated image. Why pixelated image you may ask? It is become the MRO orbits around the red planet at an altitude of 166 miles and used its specialized HiRise camera to spot and capture an image of the rover in the Preserverance Valley.

Now that the dust storm has started abated, the matter of concern is if Opportunity could harness sunlight to power itself and charge its batteries or not. Since the dust storm might have deposited a thick layer of dust on the rover’s solar array, it could be a difficult task for the rover to harness energy and snap out of its hibernation mode. Opportunity went into its critically low battery power on June 10 which pushed it into hibernation mode with only the internal safety circuit working around to check if the solar arrays were able to harness energy or not. Also, it is powered by plutonium that keeps it warm but the concern is, until the researchers don’t hear it from the rover, it is still unclear whether the plutonium lasted long enough and if the dust deposited on the solar arrays obstruct its capability or not.

The images captured by MRO shows signs of dust fallout around the rover, however, it is not clear enough whether the arrays have been covered with dust or not. As of now, the rover is programmed to harness energy for a few weeks now and only after then, it might snap out of its hibernation mode and dial back home. It is expected to contact the mission control on the Earth sometime in early 2019 or as soon as January 2019 but until then, we will have to wait.