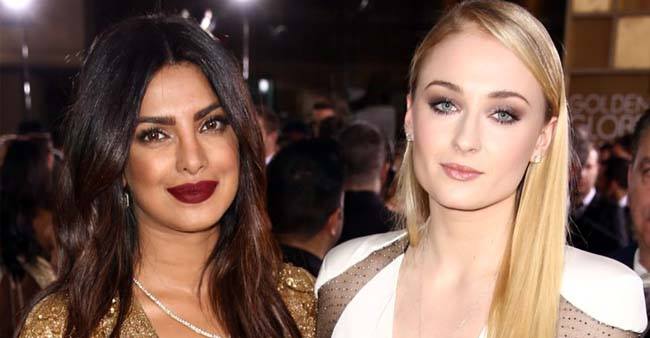 Jonas’s brothers are out on their Happiness begins tour now. They recently performed in Boston on Sunday and it was very well recieved by the fans. Actress Priyanka Chopra and Game of Thrones fame Sophie Turner arrived at their Boston concert to cheer for their husbands. They are seen encouraging and swaying from the stands while their husbands performed on the stage. They were enjoying the music to the fullest. The jam packed audience made the vibe joyful and thrilled.

The videos of  Priyanka and Sophie shaking their legs on the beats of the song have been making rounds on the internet. Priyanka is seen wearing a shiny purple dress while Sophie is in a white dress. Clearly, they thoroughly enjoyed the concert. And their presence worked as an energy booster for their husbands. Along with the Jonas’s brothers, the Jsisters are also gaining a lot of popularity with their equivalent presence in the events.

This tour is one of the most important events for the brothers as this is the first time when all 3 of them have come together for a musical tour in 10 years. The event is being popularly acclaimed by the audience. They released their first album “sucker” after a long break of 7 years in March 2019 which also features their respective wives.

As of now, the happiness tour seems to be a success as all their shows are completely sold out. The reviews that have been coming are also in favor of the stars.