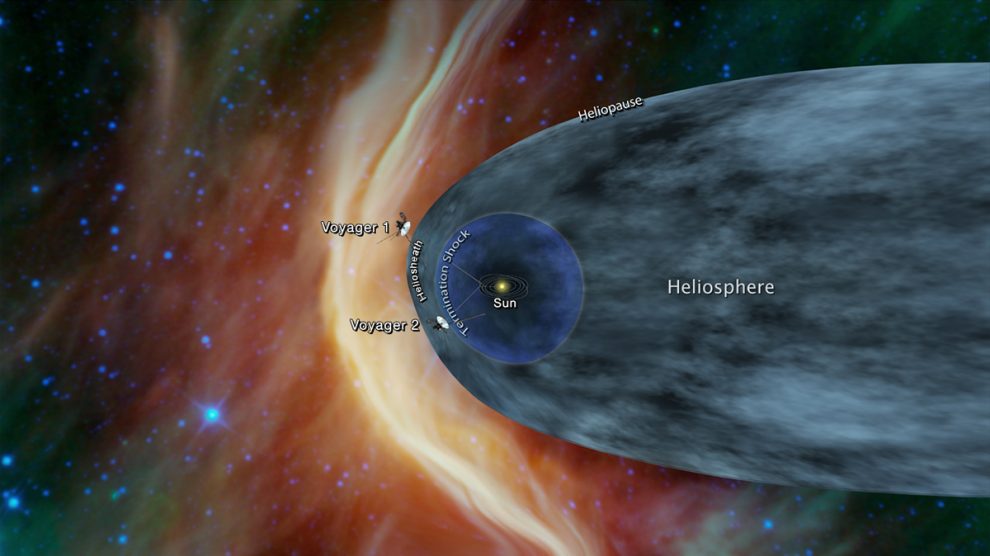 Back during the famous space race, United States’ NASA undertook a plethora of missions to various planets, objects, and basically the space of which, Voyager 1 and Voyager 2 are the golden jewels. Launch on September 05, 1977 and August 20, 1977, both Voyager 1 and Voyager 2 respectively had a long run of more than 41 years and counting. Well, after almost 6 years after the Voyager 1 crossed what can be said the edge of our solar system and the start of interstellar space, Voyager 2 could join the wagon too.

According to the reports, Voyager 2 which took a longer route to reach across the ‘edge’ from the Earth is picking up increase in the cosmic radiation that was recorded when Voyager 1 was able to embark into the interstellar space with a shorter trajectory and multiple gravity assists from Saturn, Jupiter, and finally Uranus while the flyby near Neptune lagged it a bit but finally, on August 25, 2012, Voyager 1 officially crossed the border of Solar System and entered the interstellar space becoming the first-ever human-made object to achieve such a feat.

On the contrary, although Voyager 2 was launched a month later, the spacecraft took a slightly longer trajectory leading to a different point of the solar system and now, it will be crossing it. Per the reports, Sun exerts an outward pressure throughout our solar system which is caused due to solar winds which ceases at certain point in the space where the interstellar space begins pushing back and that point is called Heliopause and it is estimated to be 123 astronomical units away i.e. 123 times the distance between Sun and the Earth at 18.4 billion kilometers.

The Voyager 2 has been traversing across the Heliosphere for years which is the region where the sun exerts a pressure with its solar winds, however, in 2007, the spacecraft reached a point in space called termination shock where the speed of the solar wind dips down below the speed of the sound. We did a quick location tracking and according to which, the spacecraft is currently at 118.70 AU from Earth zipping across space in 34,390 mph in termination shock region.

The cosmic radiation as recorded by several instruments mounted on Voyager 2 recorded a spike in radiation levels up by five perfect and this was cross verified with the data from Cosmic Ray Subsystem and Low-Energy Charged Particle. As it is believed, cosmic rays are subatomic particles comprising of helium and hydrogen nuclei that zip through space at ultra-high speeds but at a point near the start of the heliopause, these particles bump on a virtual wall and deflect and that is where the heliopause and termination shock meet.

Researchers noticed a similar spike in the cosmic rays when Voyager 1 was able to traverse the heliopause but Voyager 2 experiencing the same isn’t the sole indicator that could help us detect if it is in the interstellar space or not because the space is ever-expanding and therefore, researchers have estimated that Voyager 2 must reach the interstellar space sometime before 2030.