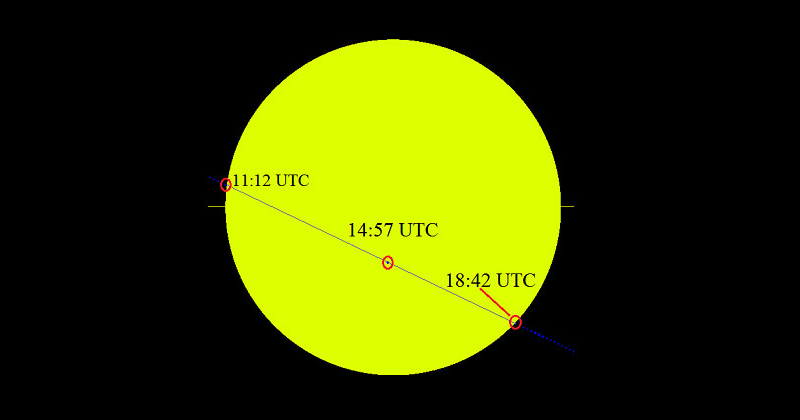 In a celestial extravaganza, our solar system’s smallest planet Mercury will pass in front of the sun on May 9. Skygazers can view the small black dot in front of Sun from 7:30 am til 10:42 am. Next Mercury’s flyby will occur in November 2019 therefore, astronomers and space enthusiast are excited to witness the stunning transit.

Transit is a phenomenon where one celestial body comes in front of the other body and passes by when seen from the Earth or from a spacecraft. The rare Mercury transit will be visible from nearly all parts of the Earth including — Europe, Asia, Africa, North America, South America, Pacific, Atlantic, Indian Ocean, Arctic, Antarctica. However, it will not be visible in Japan and other parts of eastern Asia.

Scientists from UCLA`s Institute for Planet and Exoplanets will offer free view of the transit where Mercury will appear as a small black ball crossing the Sun. People in California can see the transit from 7:30 am til 10:42 am.

Indians will be able to see the Mercury surpassing the Sun at about 4:30 pm, revealed Astronomical Society of India (ASI). Solar system’s smallest planet will take couple of hours to cover quarter of its path. After 6:30 pm IST, people in India will not be able to see the remaining transit due to the sunset.

Since Mercury is very small when compared to the Sun, viewing it with naked eyes will not be possible and interested people need telescopes to view the small black disk. In addition, viewing directly towards Sun can be harmful thus, you need special types of telescopes or binoculars to witness the event.

Mercury transit is a very rare phenomenon and it will occur just 14 times in the 21st century. Students and space enthusiast are very excited to view the transit but make sure to take proper precautions as viewing directly towards the sun can cause permanent blindness.