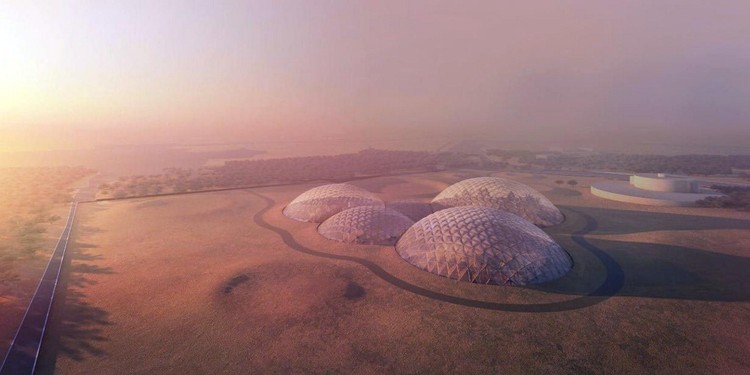 In February, the UAE declared its ambitious plans to build the first-ever city on the red planet, Mars.The project, named Mars 2117, was unveiled by Dubai’s Sheikh Mohammed bin Rashid Al Maktoum at the World Government Summit and is part of a 10-year national program that focuses on spearheading scientific breakthroughs.

The country plans to work with investigators from around the globe to develop technology that makes travelling to and breathing on the red planet possible. In September, the Dubai Media Office proclaimed their plan to build a simulated Mars colony in the Emirati desert to produce the food, energy, and water systems that could help future settlers of the Red Planet.

Last week, the World Government Summit released an immersive 360° experience of what the futuristic city might look like, giving viewers the most detailed view of its city yet.

The release is part of Dubai’s Mars 2117 Strategy, which seeks to build the first settlement on Mars in the next 100 years.

Sheikh Mohammed at the time said that “The landing of people on other planets has been a longtime desire for humans. Our aim is that the UAE will initiate international efforts to make this dream a reality.”

The recently launched video begins with a greeting from a holographic representative named Said of the “United Government of Mars”, greeting you to your second home.

The digital host says that the scenes are set 70 years after humankind has set up a community, submitting the UAE envisions the first manned mission taking place in the year 2047.

Spectators then enter a flying pod that takes you on a 2.5 kilometres trip, showing you the sights of the city. The City of Wisdom, as humankind’s first settlement on the red planet will be known, comes complete with labs, a university, skyscrapers, beautiful architecture, and 600,000 citizens.

During the seven-minute long tour, you are transported from the exterior of the planet’s surface to the inside of some large domed buildings. The footage unveils a Hyperloop transport system in place at the colony, as well as all manner of robots, flying vehicles, and crowds of people. For the full immersive experience, users will need to view the video using a VR headset.

Is it painting? Juno captures stunning image of Jovian clouds on Jupiter[+PHOTO]
Reality check on Tesla Roadster on Mars: Elon Musk ‘totally made it up’