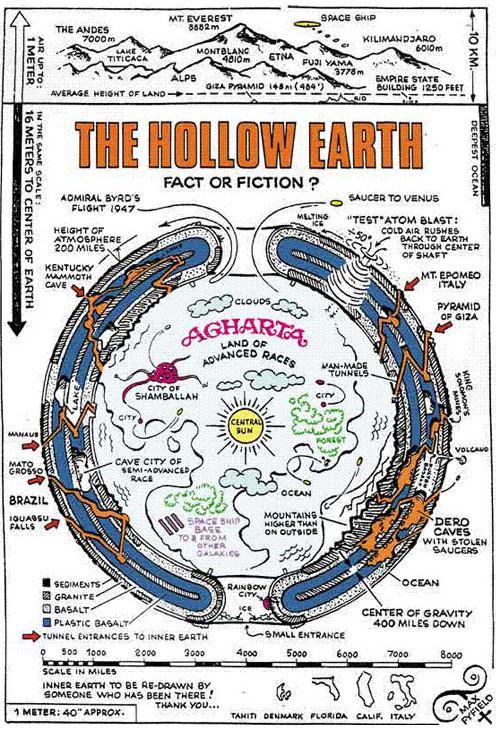 Although, majority of the people believe that our Earth is round, but now, a couple of conspiracy theorist groups have come up with different shapes of our Earth like the Earth is flat like a disk or hollow from within. Those people who believe that the Earth is hollow are called the hollow-Earthers. After analyzing an ancient map these hollow-Earthers, are now convinced that there is a road inside our Earth which leads to the paradise. They also believe that UFOs and flying saucers are sent from the interior of the globe by ‘guardians of the planet’ to keep an eye on the human race and prevent potential nuclear war. Currently, the community of hollow-Earthers is headed by author Rodney Cluff, and he believes they their supporters are growing in numbers. Mr. Cluff said, “More and more people are coming to terms with the fact that the Earth is hollow. I get emails from people learning about it every day. It’s definitely growing in popularity – certainly not in the millions but maybe in the thousands.”

In 2007, Cluff had planned a voyage to the hollow Earth through an opening in the North Pole, but later, he canceled the plan. Now he claims that there two openings into the inner Earth near the poles and one in the Himalayas. According to him, at the center of the Earth, there is a paradise in which superhumans are there, and they are joined by the Nazis from World War II and the lost Viking colonies. Inside the Earth also, there is the sun that is divided by day and night sides. Cluff said that he believes that the shell of the Earth is around 800 miles thick, from the outside to the inner surface.

Cluff is against the claim made by the flat-Earthers. “I don’t know how the flat-Earthers can be so confused. They are obviously wrong. The world is not flat – it’s hollow. They reject all the evidence,” he said. Unlike, the flat-Earthers, the hollow-Earthers believe that our Earth is spherical but with a hollow body. Their conspiracy theories also suggest that the moon, the stars, the Sun, and other planets are all hollow bodies.

Russia Launched Angosat-1 to improve the telecommunication between the countries.
See this astonishing video where people thought SpaceX rocket as UFO in the sky