As per the several rumors, the most popular chat messaging app, WhatsApp is soon going to reveal its voice calling feature using VoIP. Some of the reports suggest that the app users have to wait for the feature as the company has delayed the official announcement.

Moreover, users need to download or update their app the version 2.11.528/531 and also have to receive a call as an invite from a friend those who has already activated the feature.

However, TeCake is is offering its readers a chance to enable WhatsApp’s voice calling feature. All you need to click here to Download WhatsApp ver. 2.11.561 to ver. 2.12.7, and get a call from a user who has already activated the feature. 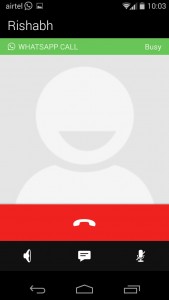 Moreover, if you don’t have any known person with this feature, you can leave your WhatsApp contact number in the comment section below or at the TeCake contact page and you will receive the invite call from us in between 10:00 am to 5:00 pm. After having received the invite call, you will get your app activated with the latest WhatsApp voice calling feature.

“WhatsApp is on a path to connect 1 billion people. The services that reach that milestone are all incredibly valuable,” says Mark Zuckerberg, Facebook CEO and founder.

In addition, Jan Koum, CEO WhatsApp uncovers the mystery and confirms that voice calling feature is not a rumour, the company will officially launch the feature in Q1, 2015. It would take time for the developers in rolling out the functionality. He further added that the project is currently is beta phase and they are testing the servers that if they could handle the load or not.

Note: The firm reported that the feature is not stable yet, so it may not get activated on your device. Therefore, you have to wait for another update. Till then stay tuned.