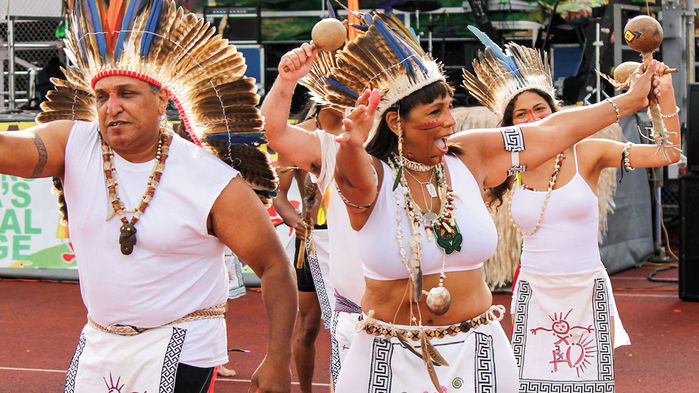 Tribes and Species extinct when the number of people or animal related to the particular set of species began to decrease and eventually fade away. In the latest revelation, a man named Jorge Estevez came into the picture representing the ‘extinct’ Taino tribe, the indigenous Caribbean who were supposed to have extinct over 30 years away after the European colonization. Jorge Estevez claimed that his tribe isn’t extinct completely and that he belongs to the Taino culture and practices all the ritual thought by the ancestors for years. He is presently a Taino culture expert at Smithsonian’s National Museum of the American Indian in New York City.

According to the official reports, people belonging to Taino culture were marked extinct by scientists and historians. The reason behind their extinction was due to brutal slavery, disease, and bizarre consequences after European colonization which completely eradicated the culture and left no offspring to prevent the culture from being extinct. Taino culture is believed to of North American tribes. A dual study reported the existence of this culture. Firstly, a 1000-year-old skeleton was excavated from the Bahamas which is believed to be the point of contact for Europeans during their colonization. The skeleton is a woman and it is believed to be a precursor and the genome is related to modern Caribbean population.

Archaeologists and historians dug the skeleton from the Bahamas where the site is located in Preacher’s Cave on Eleuthera. The excavation began in the 2000s and it is believed that Puritans came from European countries for colonization in the Bahamas took refuge in the cave after their ship broke or due to an incident. The site also revealed certain indigenous artifacts as well as well-preserved bodies people in burials. Hannes Schroeder of the University of Copenhagen is an ancient DNA researcher who was looking for DNA of these indigenous Caribbean tribes. Although the chances were too feeble, he continued his search and finally found five tooth samples from the cave which would valuable and useful information about the tribes living in the vicinity.

Of the five teeth from different burials, one of the teeth had perfected preserved DNA which was used to sequence the base nucleotide a number of times giving detailed information about the woman who lived 1,000 years ago. After obtaining the conclusion and comparing it with other Native American groups, he found striking similarities to people of northern South American who spoke Arawakan languages. The study also confirmed that the ancestors of that woman (whose body was found in the cave) were not residents but someone who would travel from one point to another. This concluded that the genome wasn’t inbred but spread across the larger area where the services, genes, goods, and other stuff were exchanged.

A larger part of the genetic studies suggests that modern population living in the countries of Cuba, Puerto Rico and adjoining Caribbean island belong to various indigenous North American groups as well as of African and European populations similar to how Africans migrated to the west for slavery. Jorge Estevez found “Higuayagua Taino of the Caribbean” thereby commemorating his culture and practices and he claims that there are more people related to the Taino culture who are alive even today.

Asteroid time capsules can reveal how life originated in Earth
Low-Cost, efficient, wearable sensors made up of tissue paper developed by researchers at UW